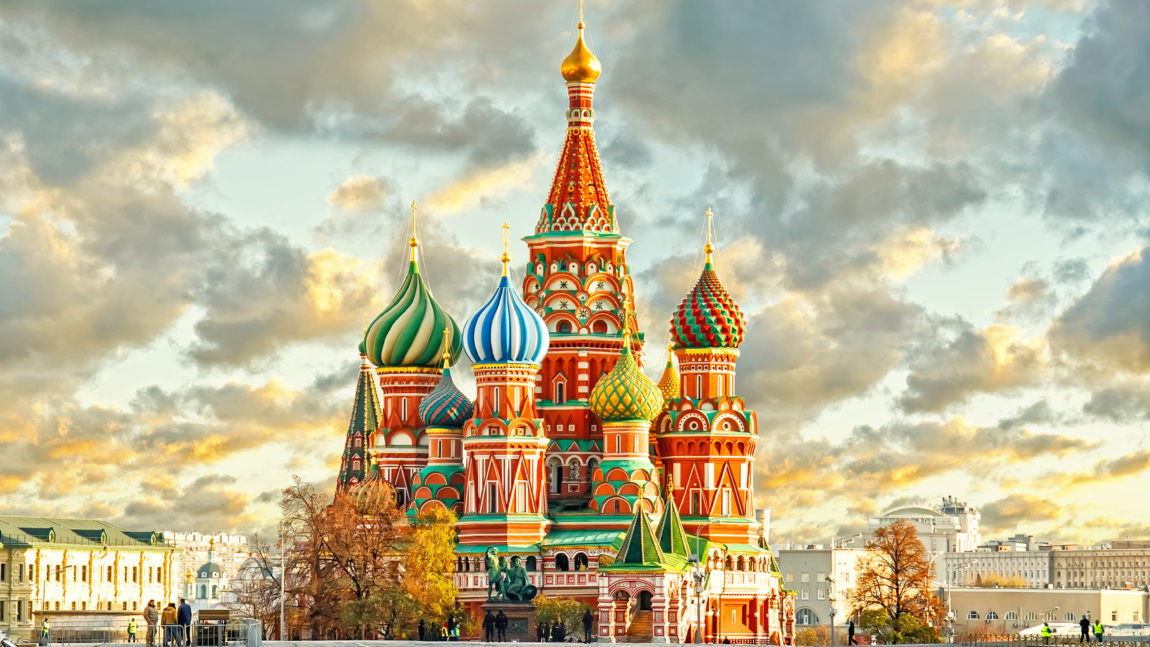 After breakfast have the panoramic tour which starts in the heart of the city, at the Red Square. After observing St. Basil’s Cathedral, Lenin Mausoleum, the State Historical Museum and other sights of the area we move along the Moskva River embankment. On the way, enjoy views of Kremlin, and continue to the Cathedral of the Christ the Savior, New Maidens Convent, Moscow State University. Visit to the Sparrow Hills observation spot opens outstanding view on Moscow. Then we travel to the Memorial Complex at Poklonnaya Hill and Victory Park, Triumphal Arch, Kutuzov Avenue, New Arbat, Boulevard ring, Pushkin square, Tverskayastreet and end the tour at Manezhnaya Square.
Visit of Kremlin grounds and 3 cathedrals:
Moscow Kremlin is a unique architectural ensemble. It is famous for the ancient Sobornaya (Cathedrals’) Square and cathedrals: Cathedral of the Annunciation; Assumption Cathedral where Russian tsars and imperators were crowned; Cathedral of the Archangel was a burial place for Grand Princes; Church of the Deposition of the Robe; the Patriarch’s Chambers; Ivan the Great Bell Tower. The world-famous Tsar Canon and Tsar Bell became symbols of Moscow, and at the Senate Square, one can see buildings of former Senate and Arsenal (monument of architecture of Peter the Great time). The Great Kremlin Palace used to be a residence of Russian tsars and imperators; nowadays it is a residence of Russian President.
Overnight stay.

After having breakfast proceed towards the stations of Moscow’s subway system which have often been called “the people’s palaces”, for their elegant designs and lavish and profuse use of marble, mosaics, sculptures and chandeliers. Built during Stalin’s rule, these metro stations were supposed to display the best of Soviet architecture and design and show how privileged the lifestyle of the Russian people was.
Today the Metro system has grown into an enormous network of 11 lines and over 160 stations, with new stations opening every year. During the tour you visit such stations as Mayakovskaya, Komsomolskaya, PloschadRevolutsii, Kropotkinskaya, Novokusnetskaya, Novoslobodskaya. It is also recommendable to visit Arbatskaya, Belorusskaya, Kievskaya and Park Kultury stations, Later enjoy Moscow Circus and then visit of Sergievposad – holy town. SergievPosad town is located in 62 km from Moscow. This town is often called Russian Vatican. In XIV century, Saint SergiusRadonezhsky founded one of the biggest and most famous Russian Monasteries – the Trinity Monastery of St. Sergius. In the central Trinity Cathedral, the founder is buried. The most famous Andrew Rublev’s icon – “The Trinity” was created specially for this cathedral.
Overnight stay at Moscow.

At morning have breakfast at the hotel, then free time in the morning for shopping and leisure, Later
12.30 – transfer to the train station to board the train for St Petersburg
On arrival at St. Petersburg our representative will assist you at station till check in to the hotel, then have dinner and overnight stay at hotel.

After having breakfast get ready to explore the city.Take a drive along the “Great Perspective” world famous today as Nevsky Prospect lined with marble palaces of Russian royalty and aristocracy, with most fashionable boutiques and art salons arranged in old settings of the 18th century, trading rows and arcades, with impressive classical and Renaissance cathedrals. You have an excellent picture opportunity with a stunning panorama along the Neva’s embankments,by the city’s Rostral Columns you will have a view of the 5 buildings of the State Hermitage Museum, the Admiralty and St.Isaac’s Cathedral. You visit the most stunning architectural masterpieces of St.Petesburg: Fine Arts Square with the Russian Museum, the magnificent Church of Resurrection on Spilled Blood, Field of Mars, the Alexanderinsky Drama Theater, Smolny Cathedral, Senate & Synod classical buildings, the Bronze Horseman and much more. Enjoy the beauty of the third largest square in the world – the Palace Square with the Winter Palace and the Alexander Colum, Later enjoy Canal Cruise for a hour then have a lunch. Post lunch viewGrand Palace and Park that carries the world’s largest system of fountains, which titled as the “Russian Versailles”. Enjoy sightseeing with the statues, pavilions and the fountains.
The Palace at Peterhof sits amidst an enormous park, adorned with fountains, statues and pavilions. The upper Garden, located between the St. Petersburg highway and the Grand Palace, is a typical French-style formal garden with five fountains including one depicting Neptune, the God of the Sea. The estate’s Lower Park lies between the Garden Palace and the seashore and boasts the world’s largest system of fountains, earning it the title the “Russian Versailles”. There are three major cascades and over 120 fountains in the park. The most impressive is the Grand Cascade. Overnight Stay.

Post breakfast at the hotel, visit the Hermitage State museum.Theprime city attraction is the Hermitage Museum. For many traveling to Russia it is the main destination and even the reason for the tour. The director of the Hermitage once put it “I can not say that the Hermitage is a number one museum in the world but I know that it is certainly not number two.” And with over 3 million works of art exhibited in five connecting palaces the museum can’t fail to impress. If works by Picasso, Van Gogh, Rembrandt or Leonardo da Vinci don’t make you gasp then the interiors of the Winter Palace will. The five buildings that make up the museum include the opulent Winter palace, which was built by Peter the Great’s daughter (Elizabeth) and has undergone major renovations that have left it sparkling. Walk up an imposing baroque marble staircase and marvel at all the gold leaf, and check out the several heavily decorated rooms including a throne room. ??It can take a complete day to see the highlights, but investigating every corner in each of the five linked buildings could take years. Later enjoy sumptuous lunch then free time for shopping and leisure.
Overnight Stay.

Day 07 Return and Depart to Hometown

Have breakfast and then transfer to Moscow airport for return flight to hometown.